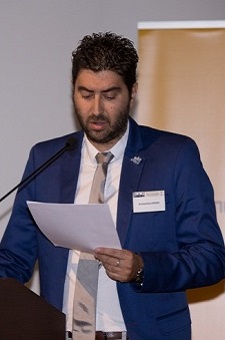 When the Greek War of Independence broke out in 1821, the name “America” had already been standing for as a symbol of freedom and democracy throughout Europe, for nearly 50 years. This powerful symbol of liberty was integrated in the Greek vision of freedom. The United States of America instantly became a point of reference in the Greek public speech and the political discourse of the educated Greeks. The Greeks tried to legitimize their Revolution by making comparisons and finding similarities with the American Revolution. Moreover, the American Declaration of Independence (1776) and the American Constitution of 1787 influenced the Greek political thought and the formation of the Greek revolutionary constitutions. American democracy became a basic argument among those liberals who wanted to advocate in favor of an uncrowned republic, as the most suitable political system for Greece. The most prominent of them was Adamantios Korais, who discovered on the perfect function of American institutions an inspirational political model. On the other hand, there were many who considered that the American version of democracy was too premature for the newly born Greek nation-state. These are the main subjects of this article, which is also focusing on the formation of the Greek image of America within the framework of the needs, hopes and dreams of the Greek War of Independence.

Konstantinos Diogos studied History and Archaeology at the University of Ioannina. He completed his postgraduate studies (MA) in Modern and Contemporary History at the Aristotle University of Thessaloniki in 2005. The subject of his master’s thesis was “Eleftherios Venizelos and the participation of Greece in the Ukrainian Campaign (1918-1919)”. In the period 2004–2007 he worked as historical researcher in various programs of the Center for Macedonian History and Documentation of the Foundation of the Museum of Macedonian Struggle in Thessaloniki. Since 2007, he has been working as a teacher in Secondary Education, while in the period 2010–2013 he was scientific collaborator of the Museum of the Macedonian Struggle. He has undertaken research and curation of various historical exhibitions, has participated in seminars on the teaching of History in Secondary Education and in Greek and international historical conferences and also in various historical research projects. In 2019, he defended his doctoral dissertation at the Aristotle University of Thessaloniki. The subject of his PhD thesis was: “The Greeks vision of the United States of America, since the Modern Greek Enlightenment to the First World War”.